An American In Basque

This story is for those who have dreamed of

cooking alongside the great chefs of Europe.

Enrolling at San Sebastian Cooking School was easy. I clicked the computer

from my Florida home and gave my

Soon I was flying across the Atlantic

aware that I would be likely scolded

by culinary perfectionists who don’t use ketchup

to cover their mistakes.

How badly would I embarrass myself,

my wife and my country?

I had anticipated my reception

with the master chefs in the kitchen of

my responses just in case:

“What is your especiality?”

“I wrap things with bacon.”

“Do you require unique tools”

“Yes. I fire the grill with safety matches.”

“On your culinary path, are you a

chef de partie, a sous-chef, or

“I am the husband who thought this class would

be a good anniversary present.”

Soon I was skipping the cobblestone

The hotel porter gave me a second look as I arrived in my best khakis and black polo shirt. I was no crude American. I read in advance that Europeans appreciate the effortless look. 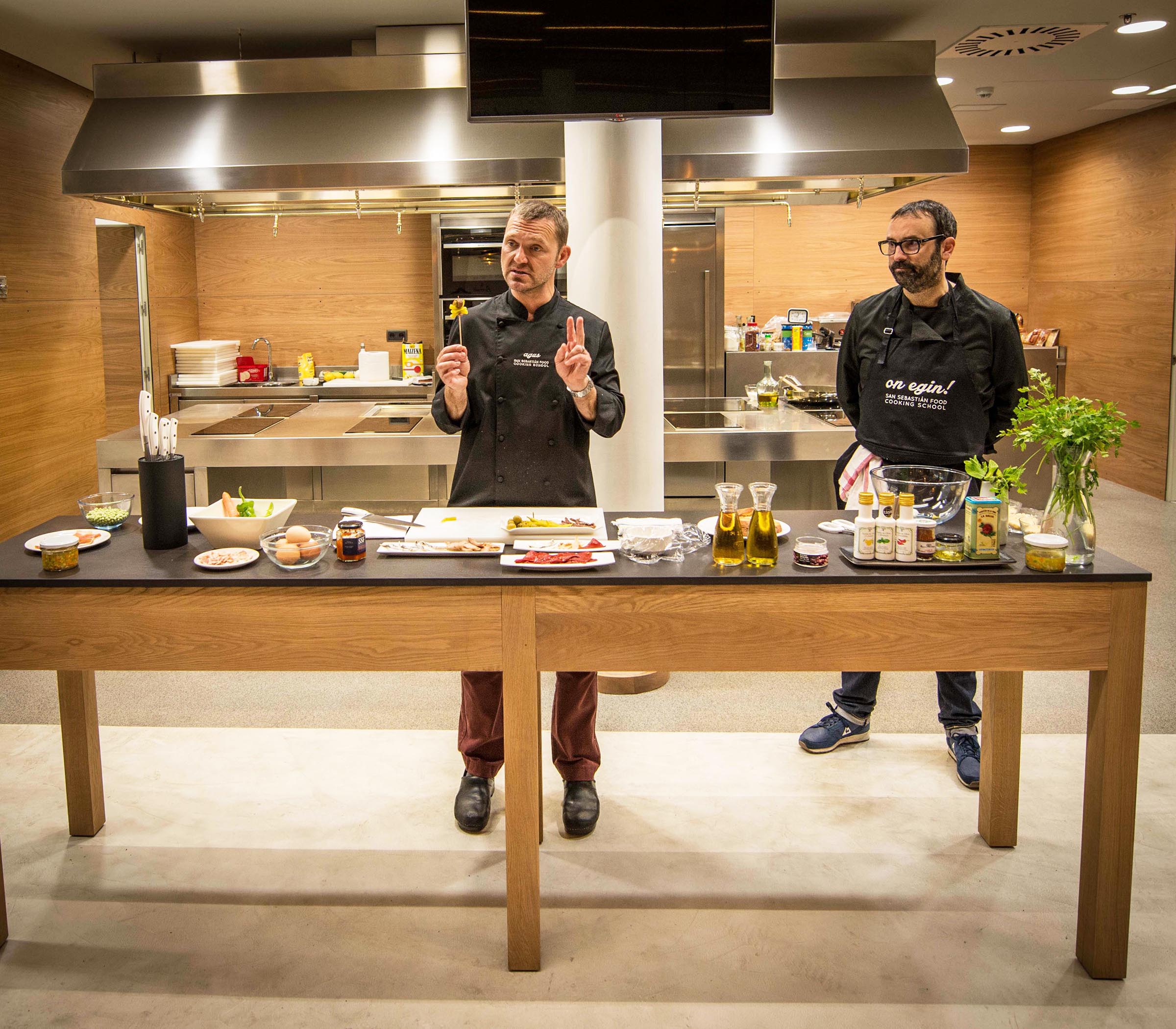 “First we shop, then we cook” announced Agus, an upbeat

Basque with a bartender’s easy manner. All introduced, Agus and our group of four: myself, my wife, whose many talents include speaking fluent French; Niki, a private banker from Guernsey ; and Asma, an attorney from the Kingdom of Saudi Arabia– departed on foot for San Sebastian’s central market.  Every Basque city has a central market. This one held a soccer field

“We are Basque. Not Spanish. Not French,” explained Agus.

We take food seriously.  There are more Michelin 5-star restaurants in

Basque Country than anywhere in the world.

“Here in the butcher’s counter, you see every part of every animal– because we waste nothing.”

We purchased gambas (prawns that rival lobster for sweetness)

pork tenderloin,  spring peas from a

local farm and anchovies just shaken from a fisherman’s net.

tossed us handful each to taste. The raw greens exploded in the mouth with wonderful taste of the Basque countryside.  Actually, I just made that up. 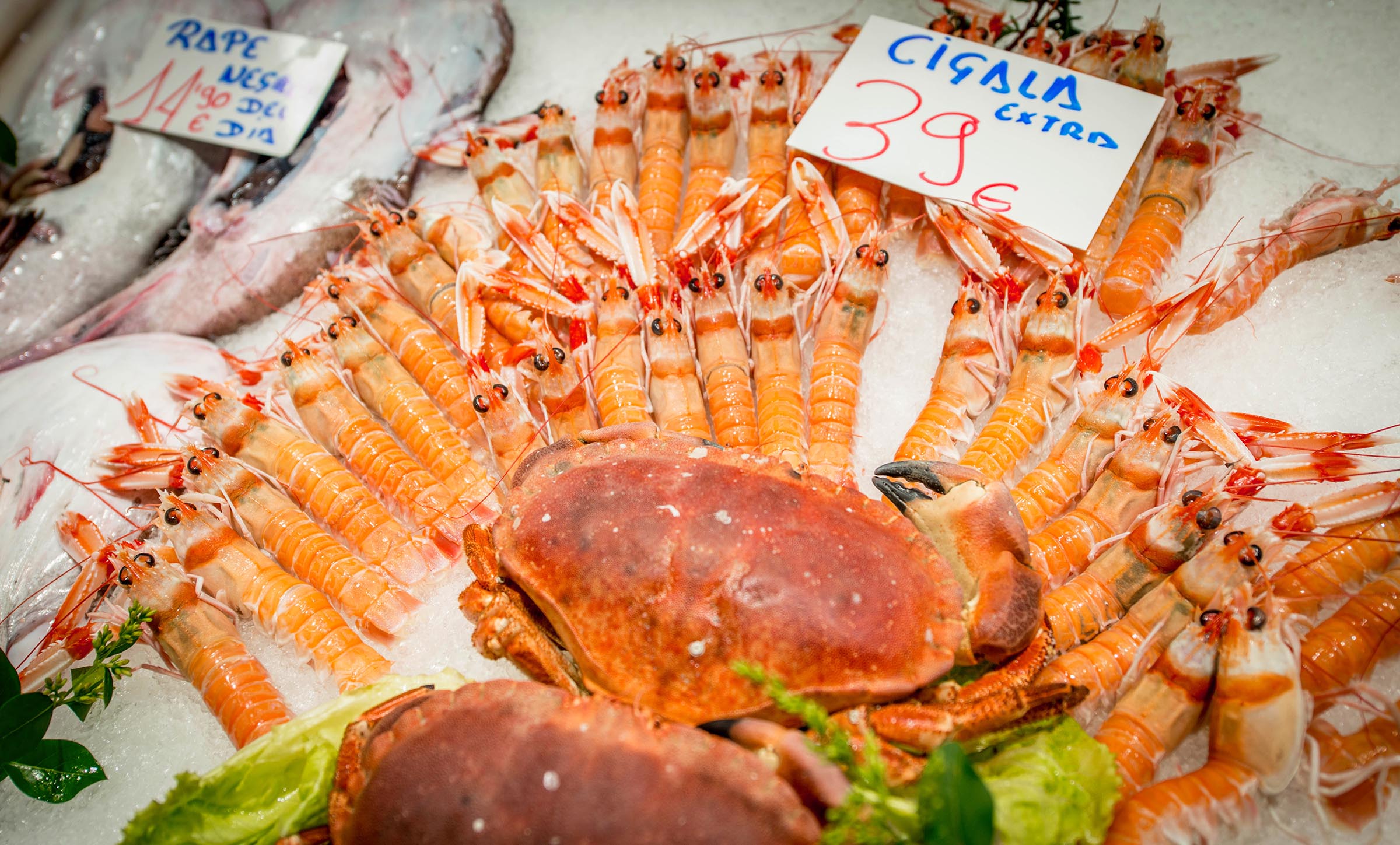 Back at the hotel, in a gleaming school kitchen,

Agus introduced us to Ben, another tall, thin, personable chef that

sounded out his words in English.

Pinxtos are the centerpoint of Basque social life! There are

Hundreds of excellent Pinxto bars in San Sabastian alone, and it is customary to stroll from one to the next, sampling each bar’s signature Pintxo. “

Now, we start with The Gilda, the most famous pinxto named after Rita Hayworth’s title character in the 1946 film.” 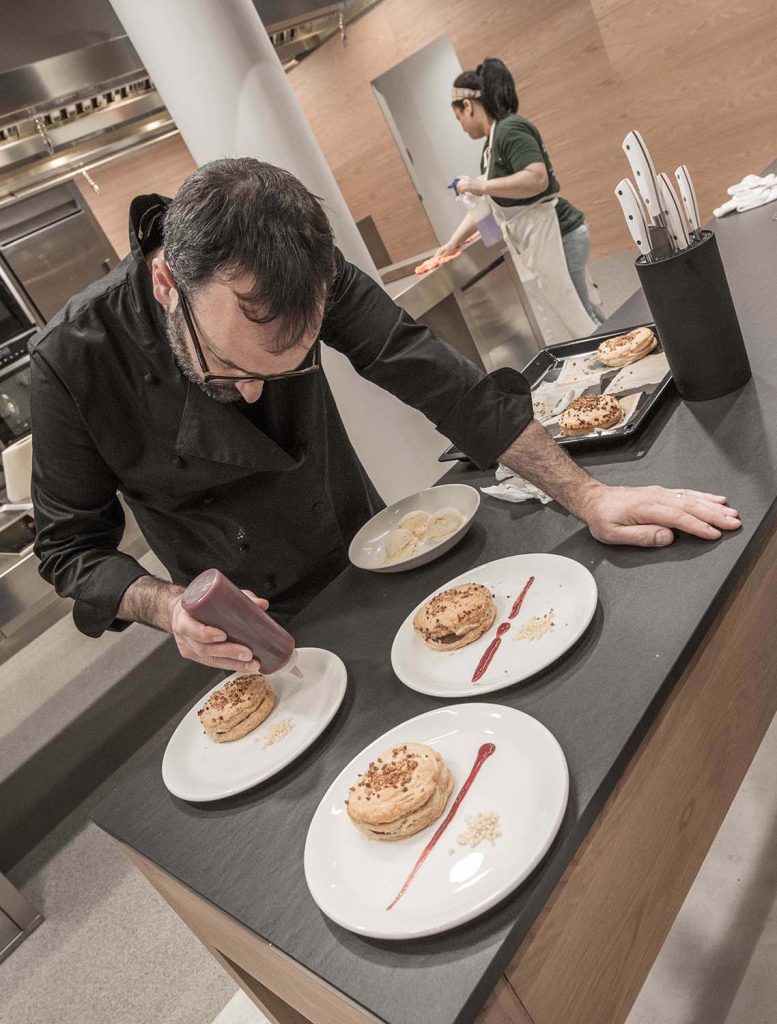 In front of me was a gleaming stone work station,

sink, and a slide-out drawer with neatly arranged knifes and tools.

I was given the task of cutting peppers and onions.

Which knife should I use? I blurted out like an American tourist.

“You use the knife that best fits your hand.”

bridge between thumb and forefinger. I felt like a gunslinger itching to pull the trigger. 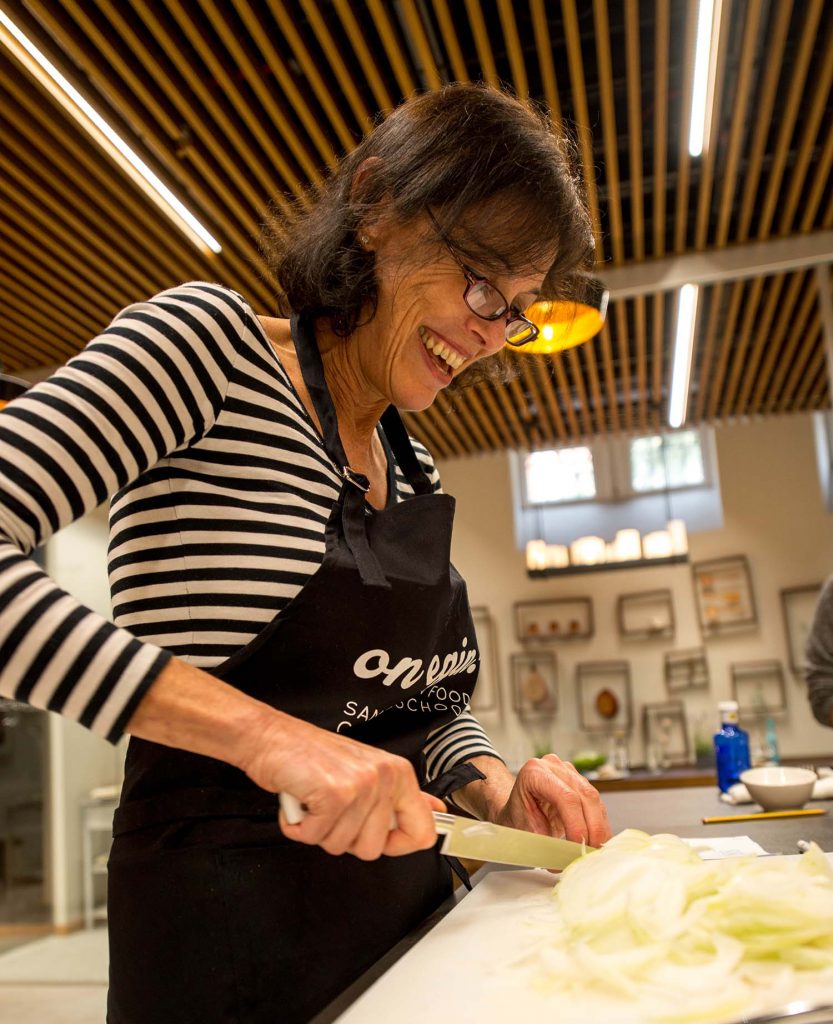 Soon, I was cutting quickly and awkwardly.

“Much, much smaller pieces!”

Turn the onion on its side.  Julianne style.”

I did as told, and was a champ when it came to measuring olive oil and

With gusto we sampled Cider, while curling up anchovies in a dazzling arcs. We stabbed them with toothpicks. We added a guindilla pepper (look that one up Julia Child!), then drizzled the whole with high-quality olive oil.  I say “drizzled”, because “drizzled” is a word that sounds

more impressive than “poured” and now that I had nearly finished

my first pintxo I was feeling like starting my own restaurant and perhaps hosting a cooking show in my off hours.

Completing each task earned us a sip of Txakoli—a Basque white wine which must be aerrated as its poured. Extend your arms as long as you can without dousing the floor. Then shout, “On Egin!” the Basque expression for

Bon Appetite, or “Come and Git it”. Down it it went, and

the taste was salty and vinegary at once.

The more Txakoli and Basque Cider I drank, the better the chef

I seemed to become! My knife and I bonded without

accident. My wife was beaming and the anniversary present was

a success.  Soon, four hours had flown by, in which I

egg boiled in plastic wrap to look like a rose with some ham), solomillio iberico ( ham with carmelized onions  and finally, Pantxineta (puff pastry with

chopped almonds. It took an additional brandy to wash it all down.

For graduating, I received a San Sebastian Cooking School apron

which I am sure would get me any culinary job I sought.  Remembering the hotel porter, I choose not to wear my apron leaving the Hotel Maria Christina. I folded it carefully and placed it in my camera bag for a safe journey home. 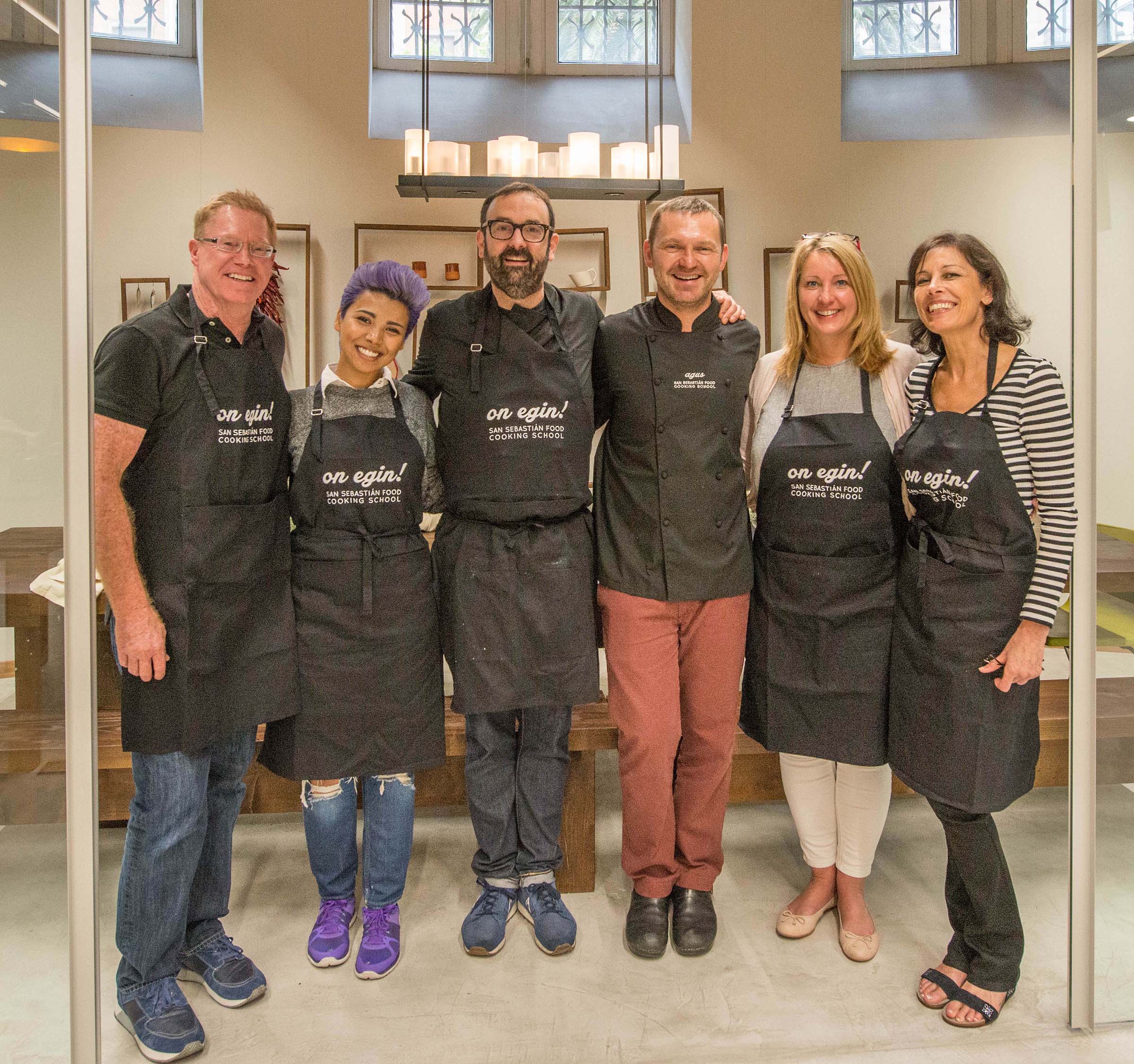 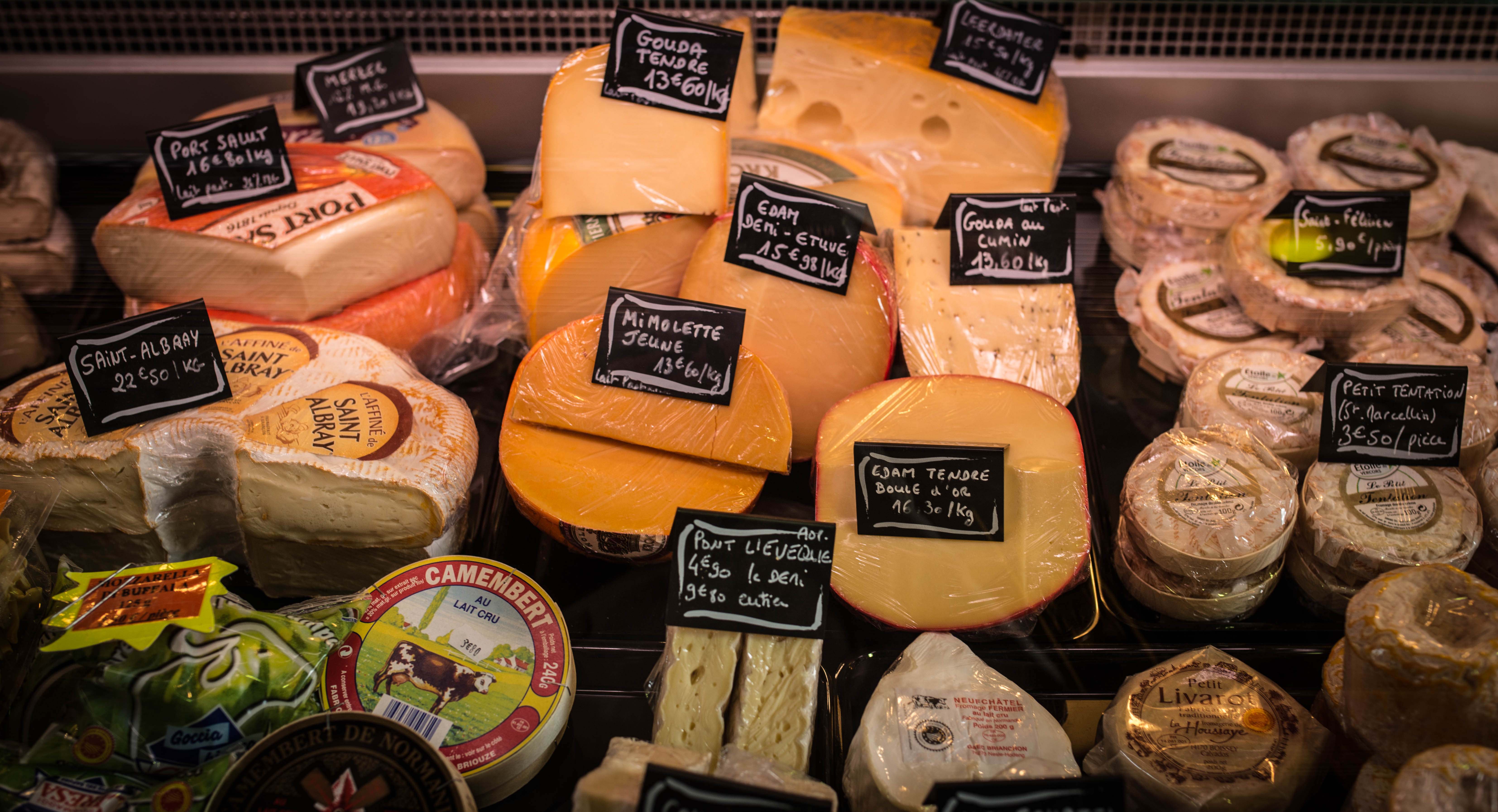 Everything tastes better in Europe. 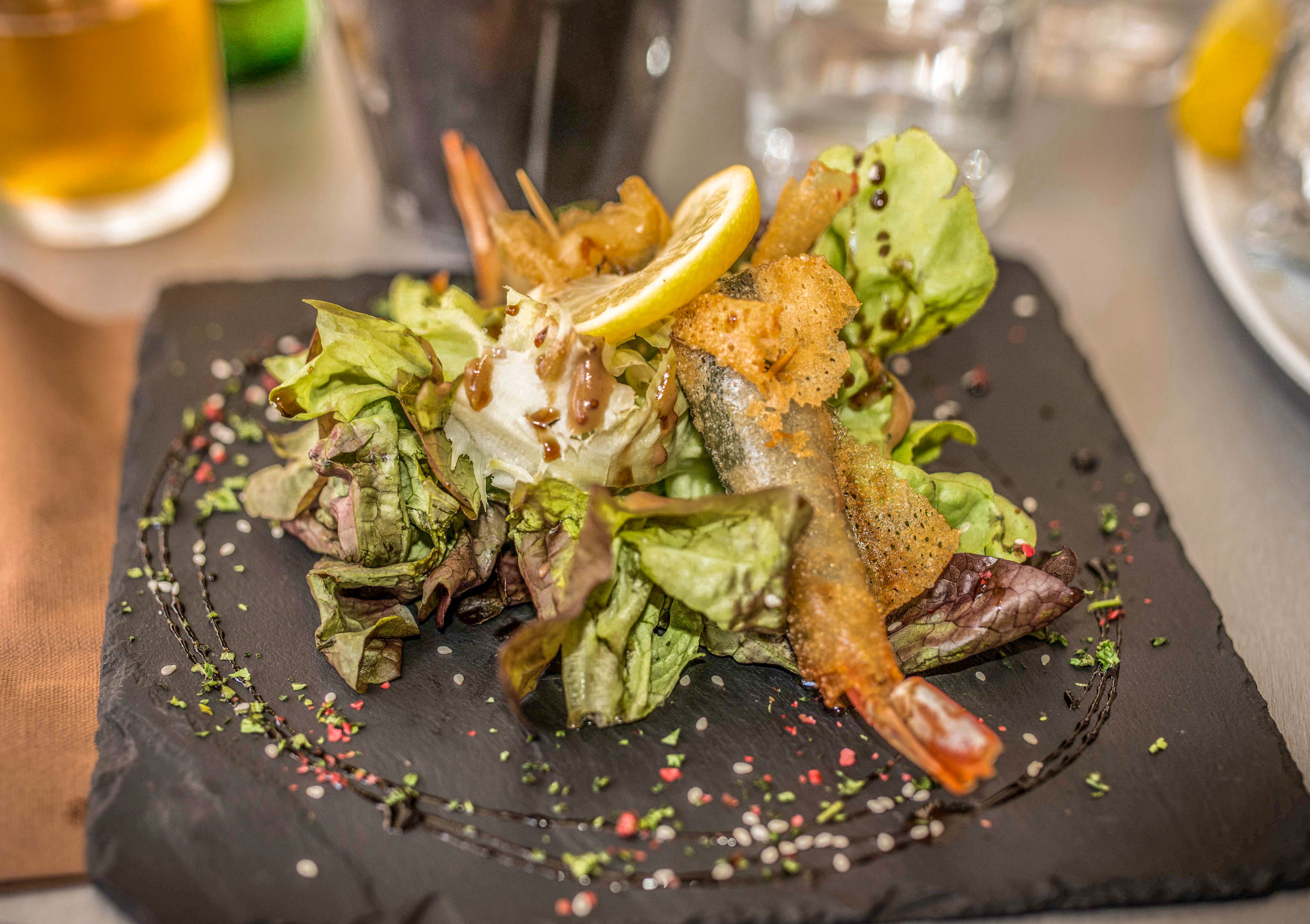 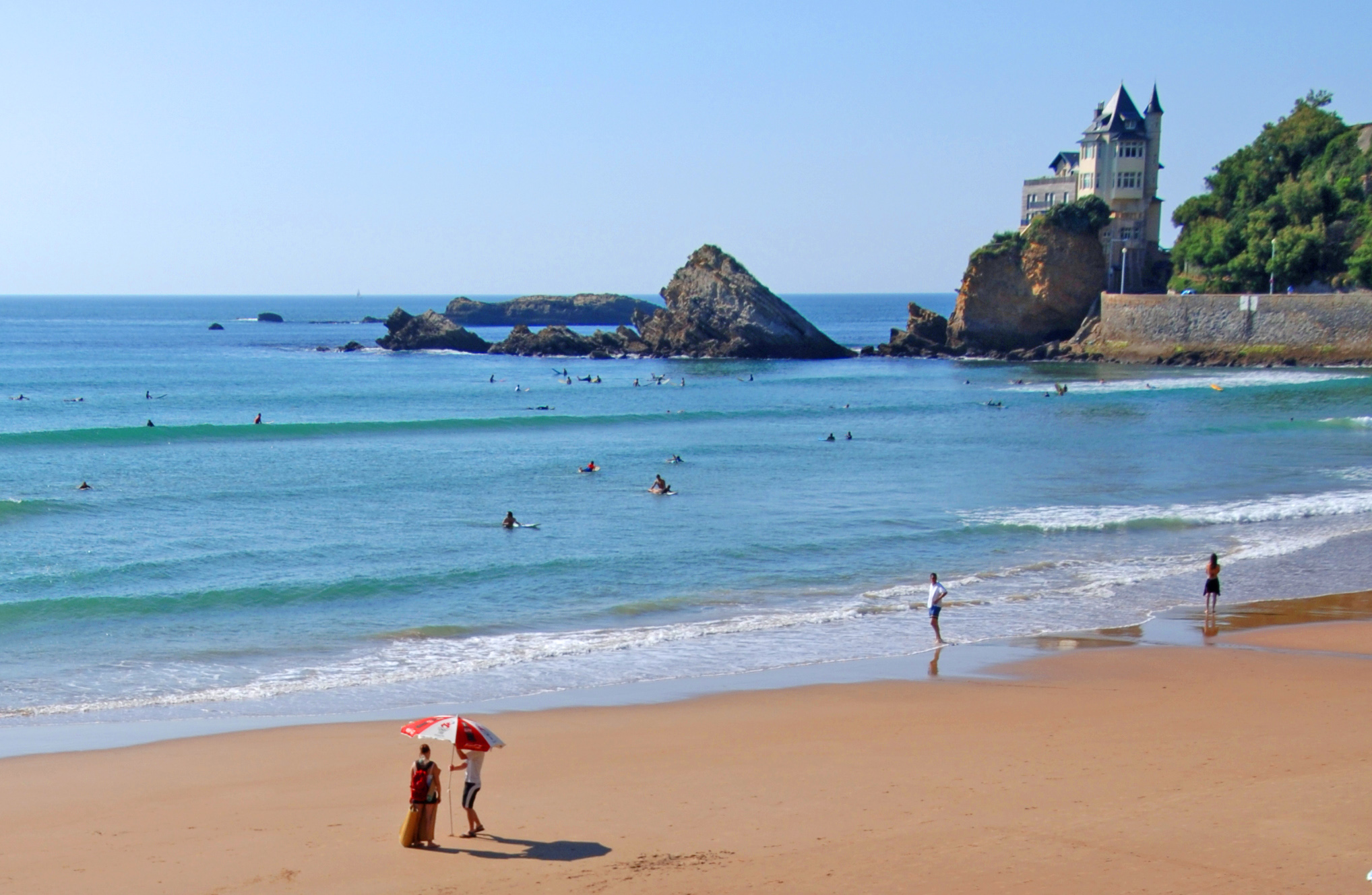 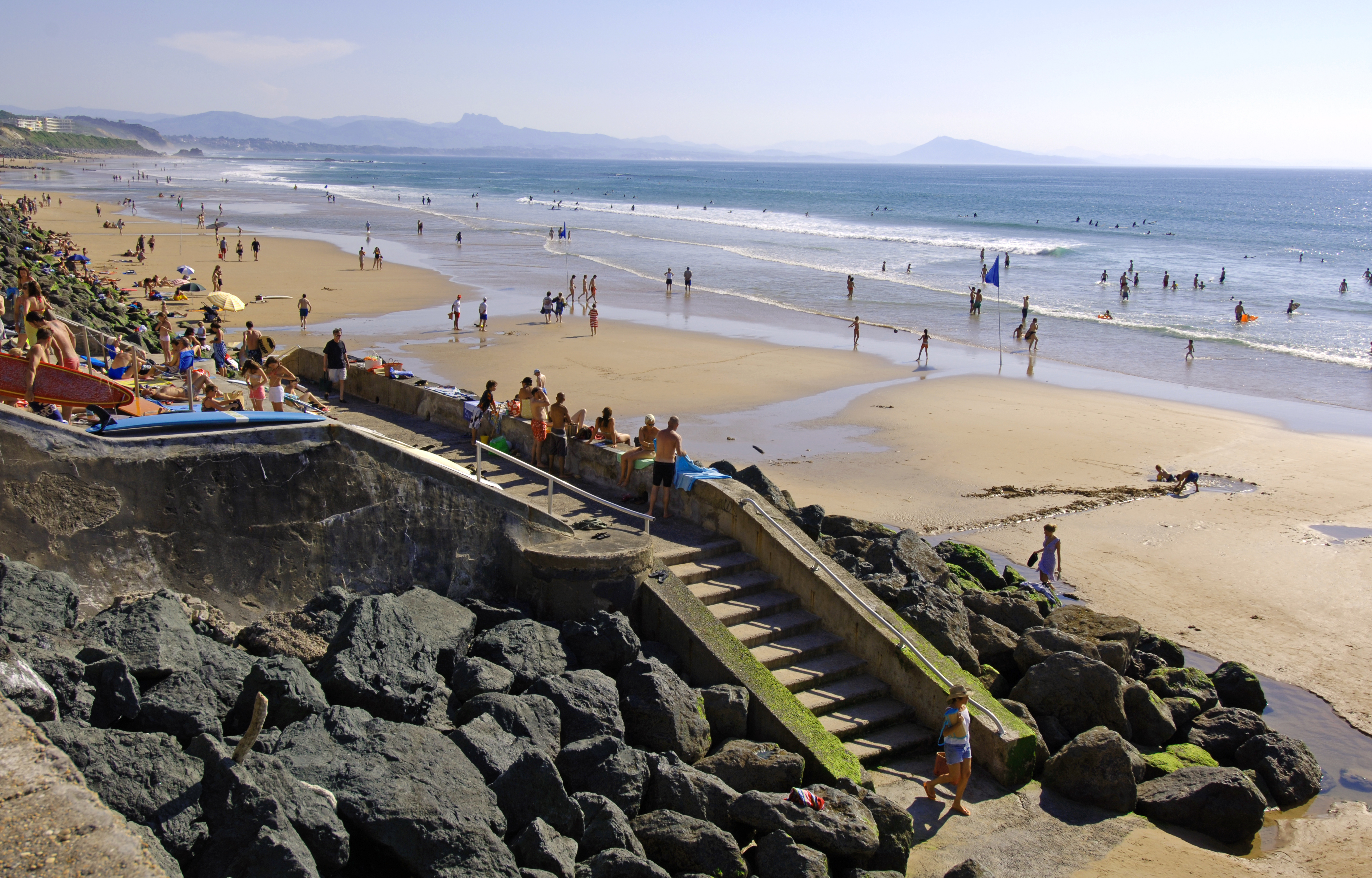