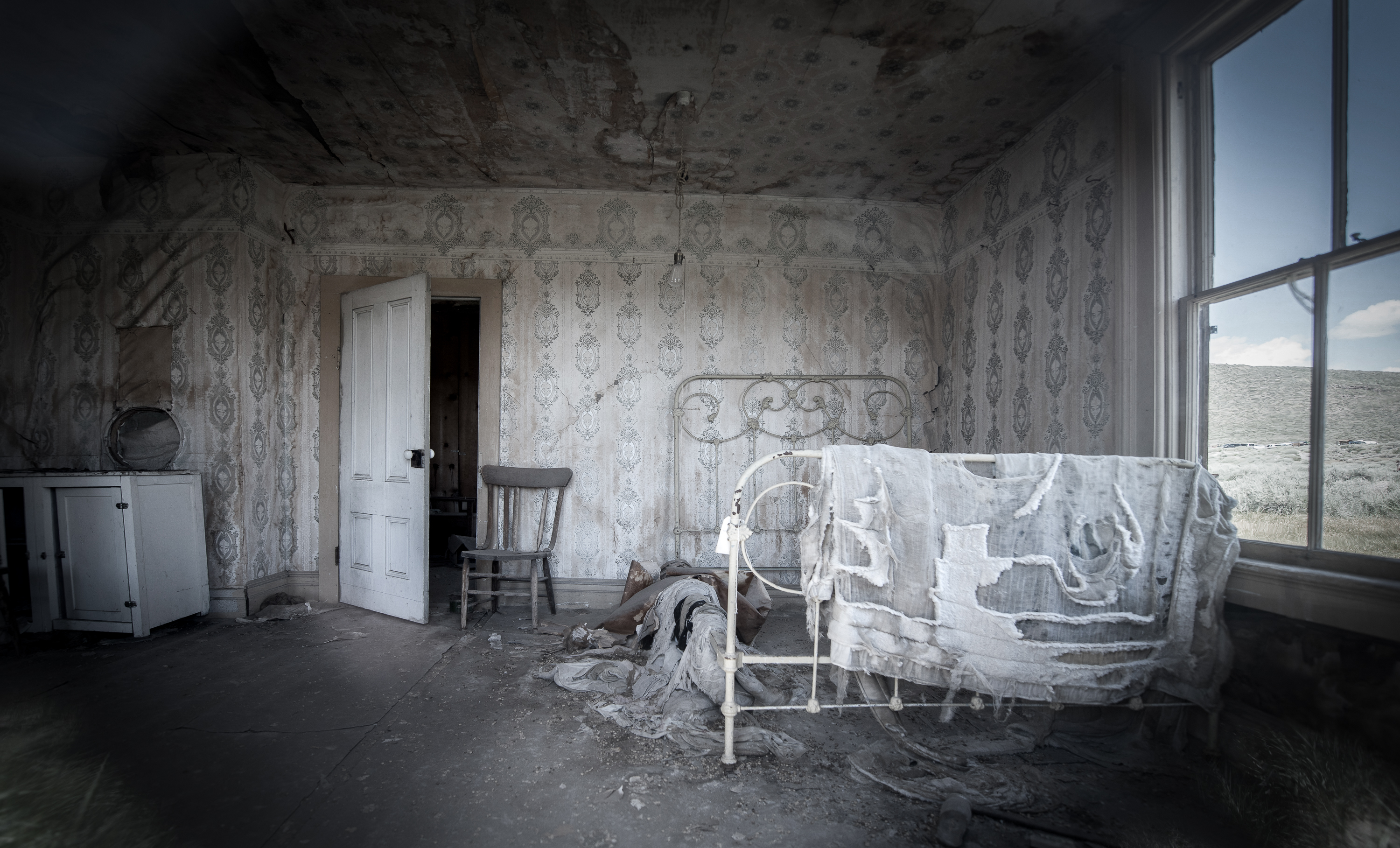 Imagine a town that grew overnight to a population of seven thousand—and for a moment in time (1876 to 1883) —vied with San Francisco and Sacramento to be the largest city in California.

The heyday of Bodie, California lasted half a decade.
Today, the ghosts of this forgotten place, tell a story for current times.

The headstones of the celebrated people of Bodie–about two dozen- are clustered within a small fenced square on a weather exposed plateau, 8,300 feet above sea level.   Those less celebrated Bodie, are buried outside of the fence: gunfighters, gamblers, opium addicts, and many of the  seven hundred sporting women that worked their trade in the more than fifty saloons that lined Main Street.

Missing altogether is the tombstone of William Body, the town’s namesake.

He was lucky for a moment and struck his pick ax upon Gold,   but froze to death a week later in a blizzard. Luckless even in death, his name was changed by  a careless sign painter.  The townspeople recognized the error, but  preferred the new spelling: B-O-D-I-E. 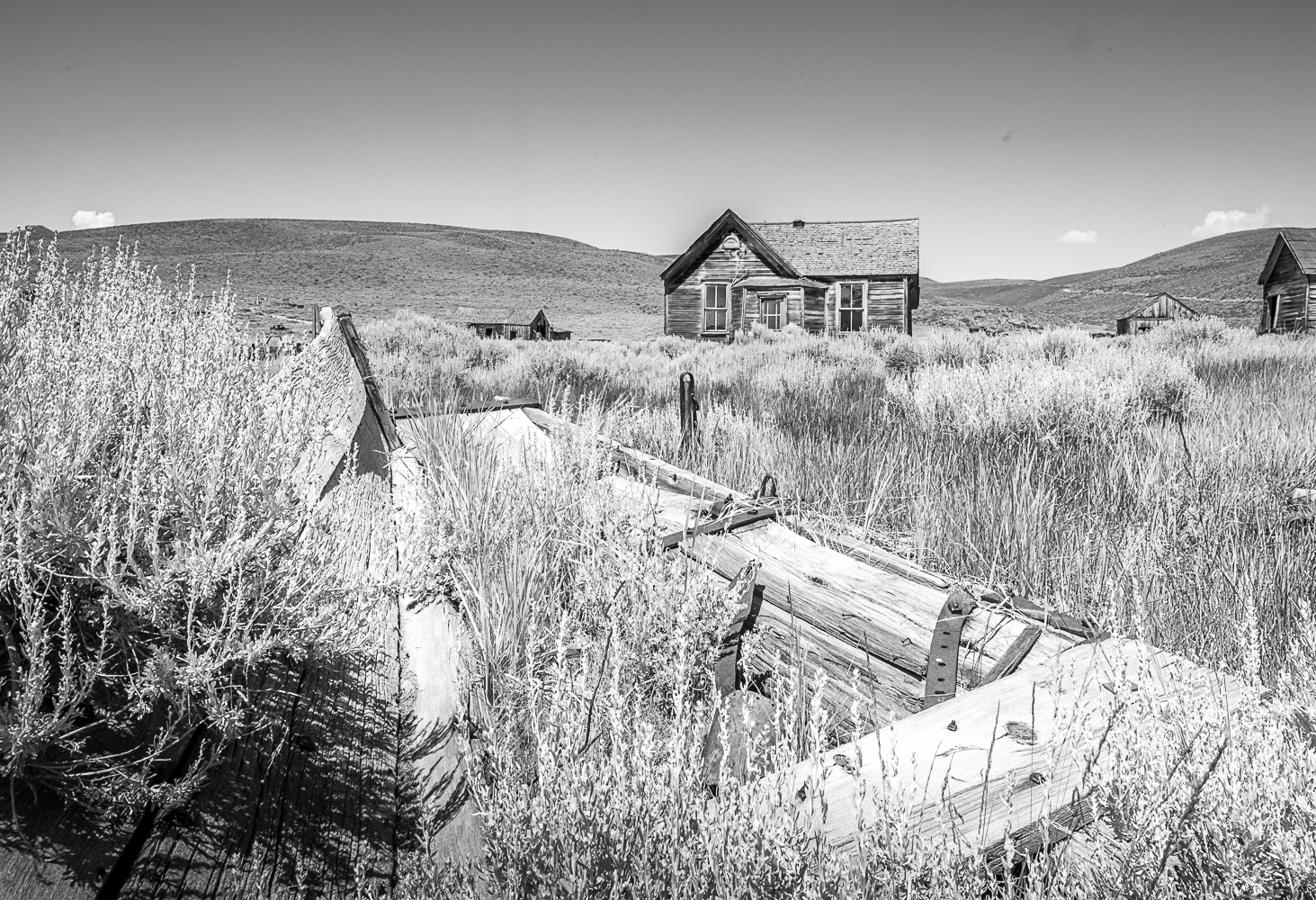 Her name “Lottie” was etched in stone.
I asked her ghost if she would show me the town.
She said that she had fit a lifetime of experience into her 35 years and
her ghost happily become my tour guide. Together we strode down “boot hill” to learn what made and destroyed the town of Bodie.

Below us was a valley of green, dotted with a cluster of long abandoned homes and businesses.
Only 170 of the more than 2,000 wooden structures remain—in various states of  decay. Monuments to dead pioneers.  A church spire, a firehouse’s bell tower and a few barns lie exposed to the unrelenting wind. Many lean over at odd angles. Parched grasses and purple mountain flowers overgrow abandoned wells, farm tools and wagon wheels. 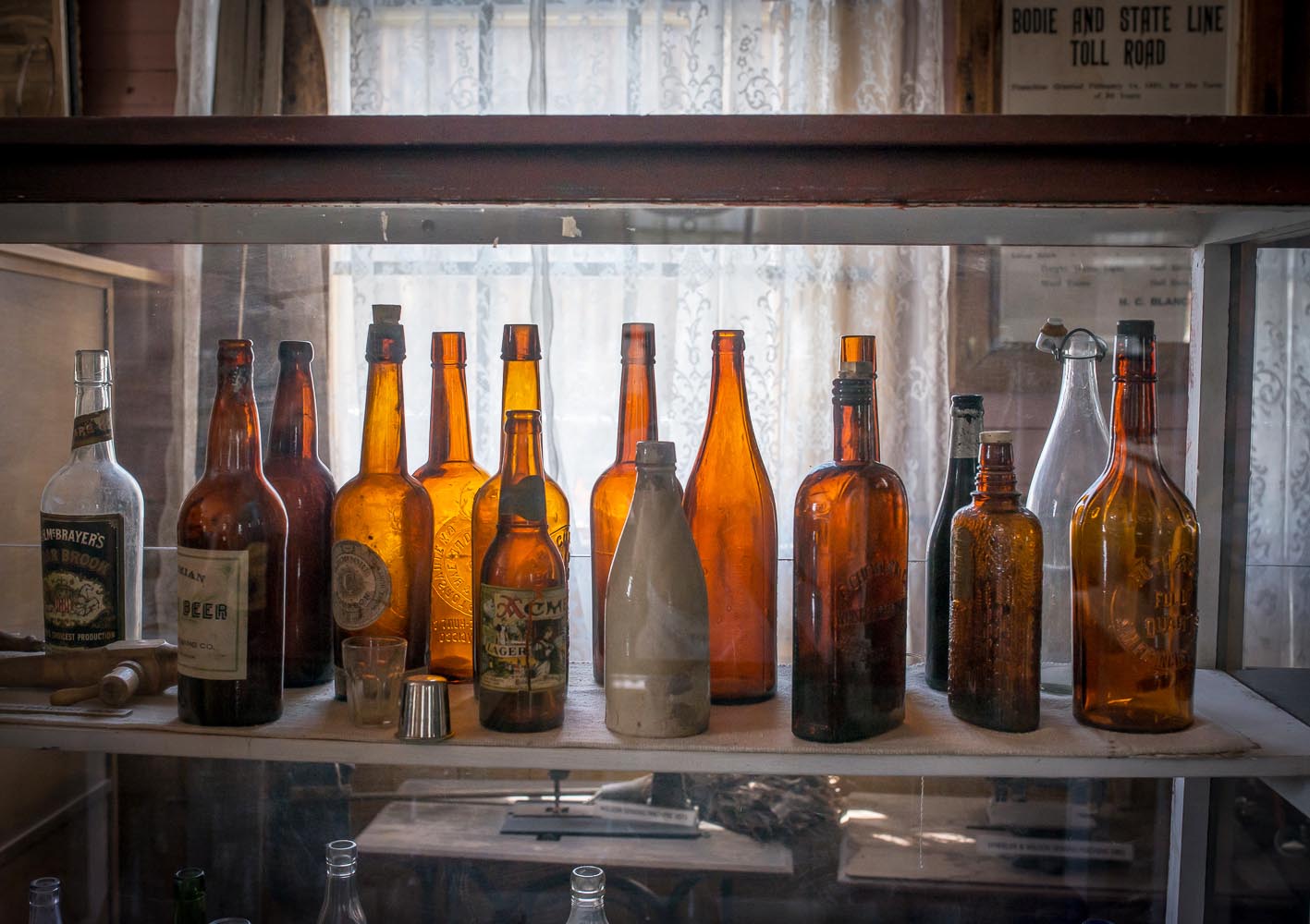 “This is Main Street,” Lottie said to me in a manner both business like and slightly flirtatious.

Her descriptions were concise.
“Saloons, general merchandise store, hotels, the miner’s
Union Hall, and two churches—one Protestant and one Catholic.
I don’t remember going to them in my time, “She winked at me at that last remark.

She was dressed with immaculate detail. “The most expensive clothes available in San Francisco,” she replied at my comment.

I pressed my face into darkened windows.
The thick, handmade glass was fogged and warped from a century of summers and winters.
Lace curtains, oil lamps, and empty liquor bottles reflected back the sunlight. 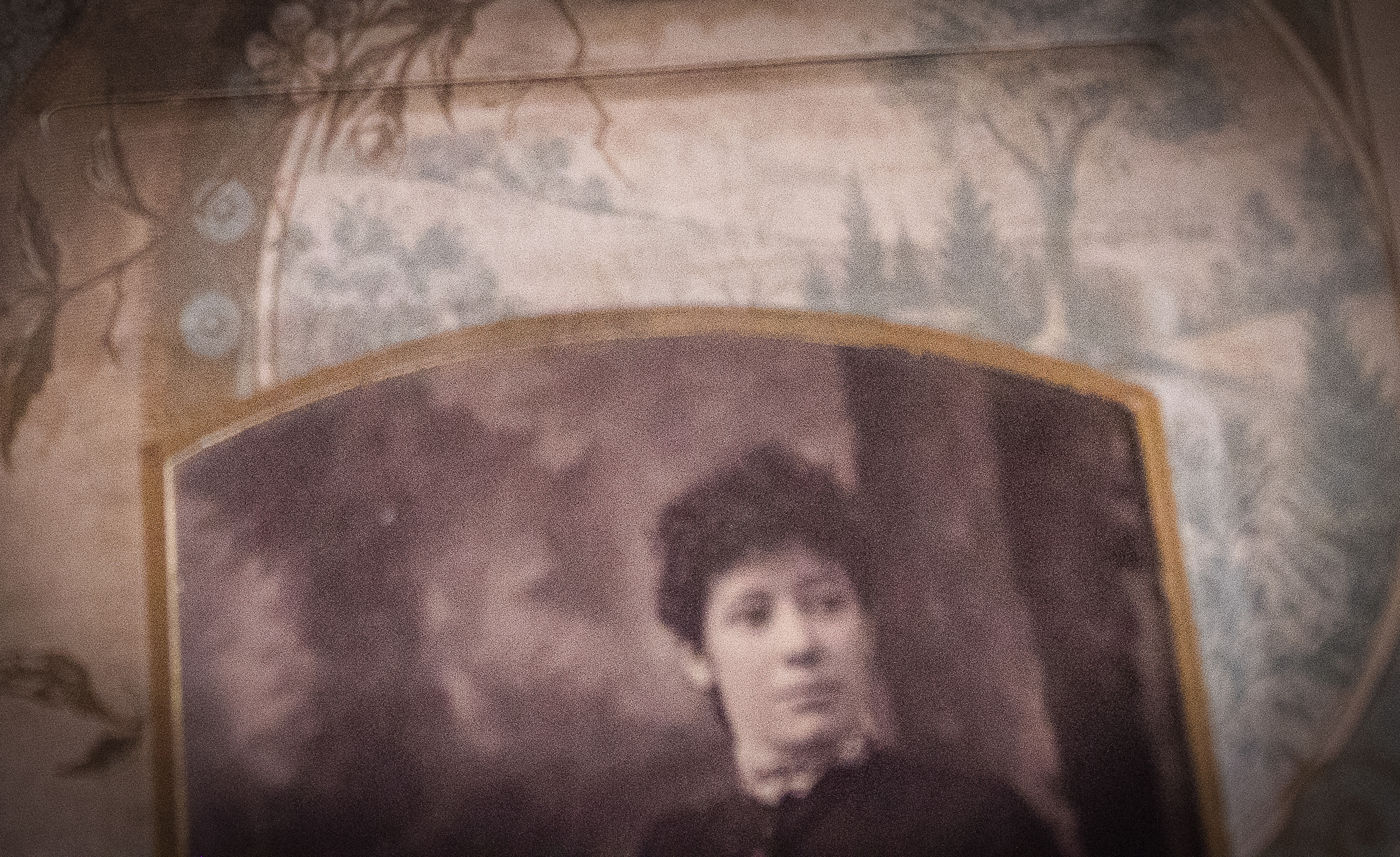 Lottie spoke to my unconscious.

“In the winter, we dug a tunnel under twelve feet of snow to get from one side of Main Street to the next. That’s why we built homes closely together. None of us had seen winters so harsh—no matter what part of the world we came from. The only happy times were in summer—when you could stand on this porch and watch the dust clouds beyond the hills turned into a twenty horse stagecoach coming for our gold.”

In my head, I could imagine dirt streets bustling with townsfolk, each with a separate purpose.

Lottie continued, “Miners came from New York, Boston, Philadelphia. The rich ones took a steamer through the Panama Canal. The boat captains were just as fevered by the gold, and abandoned their ships anchored in San Francisco Bay.”

“Just as many men came from Europe—mostly Irish I remember.”

I turned my head up the street.

“That was Chinatown”. Lottie told me. “You couldn’t be Chinese, Mexican
or Injun and live near Main Street. The Chinese sold vegetables, did laundry
and operated opium dens with bunks upstairs for those who
preferred to smoke and dream. They built the first church here—It was Taoist I think.” 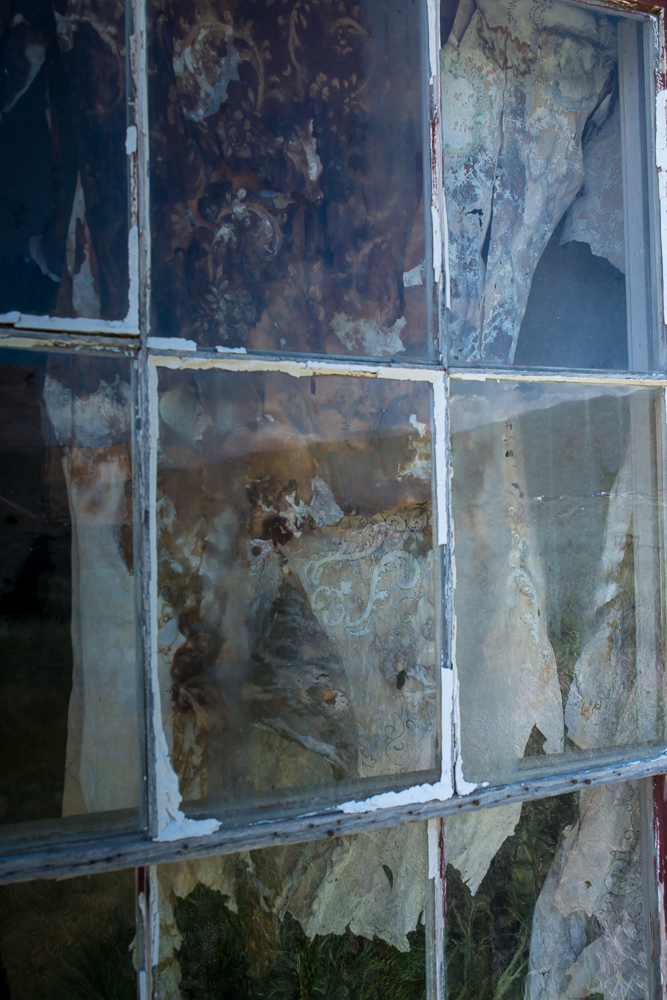 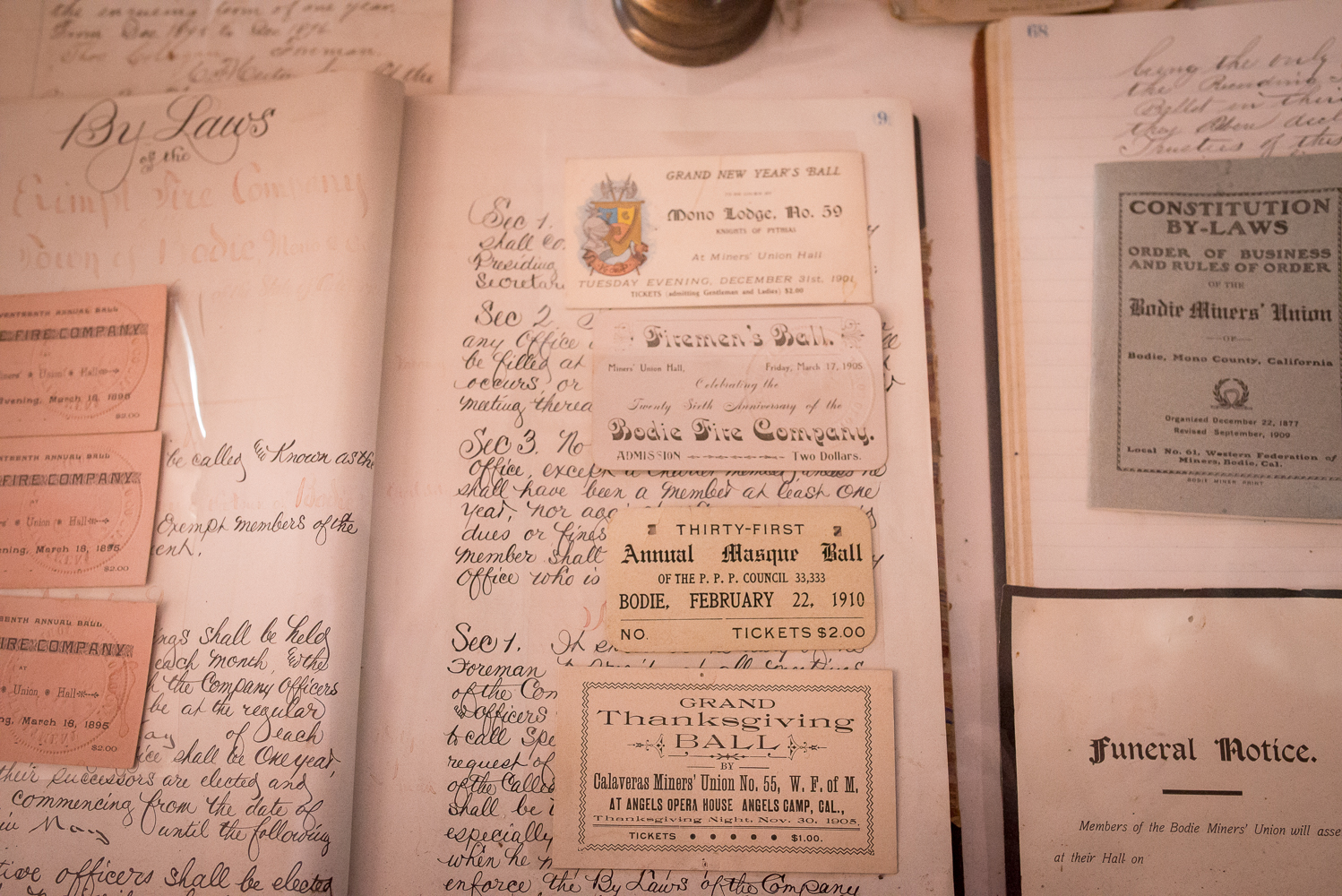 I climbed the steps and entered the Bodie Miner’s Union Hall. I thought I heard the music and the dancing that followed each  gold strike. Lottie read my mind and gave me the details.

“At first, a good man could make living himself. How many hours a day that  man could swing an ax, dig into the ground, and sift through rubble for gold
determined his worth.  The hardest workers became rich for a time.”

I touched a glass case protecting a sepia toned print of well dressed men.
Beside it was the union’s register of paid members with their penned signatures.

Lottie continued, “Soon, however, a man working alone could no longer compete with the newly formed companies of investors with their paid teams and better equipment. The mining companies bribed officials for the rights to the best claims. Disputes were settled with bullets. The law favored those with money.” 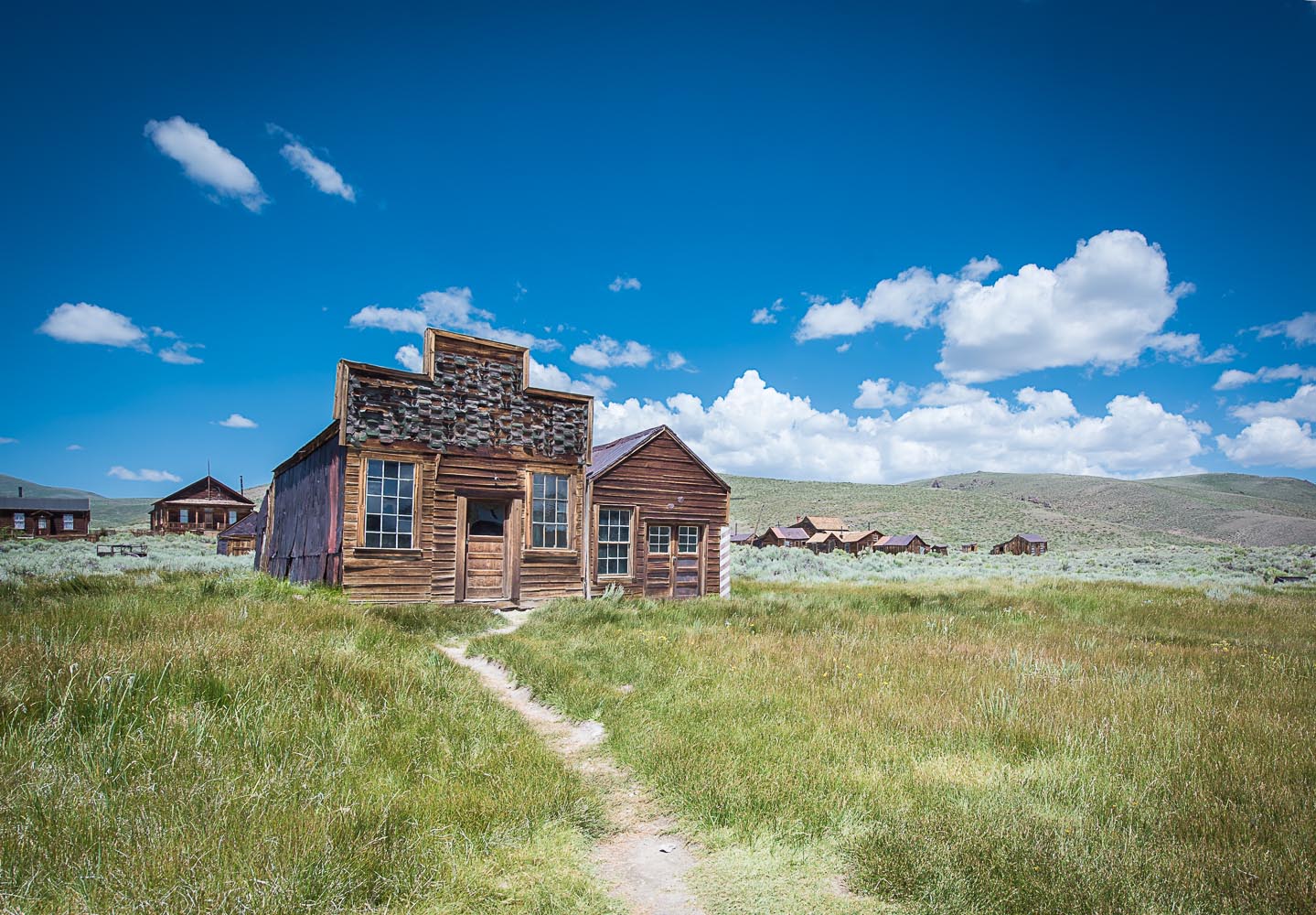 “In my profession, I had to be a good listener.  I heard the stories of travelers, politicians, cowpokes, gunfighters, con men and husbands. I learned the news before it was written in Bodie’s weekly paper.”

I pointed to the displays of weapons.

“Dodge City had marshals who collected guns from cowboys entering the city. Bodie, instead, had a murder a day. Everyone carried pistols, store clerks carried shotguns, and the Wells Fargo driver carried “the messenger”—a man with a gun that fired many rounds in succession at a force that could cut the torso of a potential bandit clean in half.

The implications of Lottie’s insight drew me outdoors.
I joined the many tourists in the  cool California high country air pointing cell phone cameras at The Standard Mine. While they snapped photos, I listened for the clang of the iron stamps that pounded the granite earth, and I believed I could spy the line of workers queuing at the office of the assayer, who gave coin for nuggets and dust. 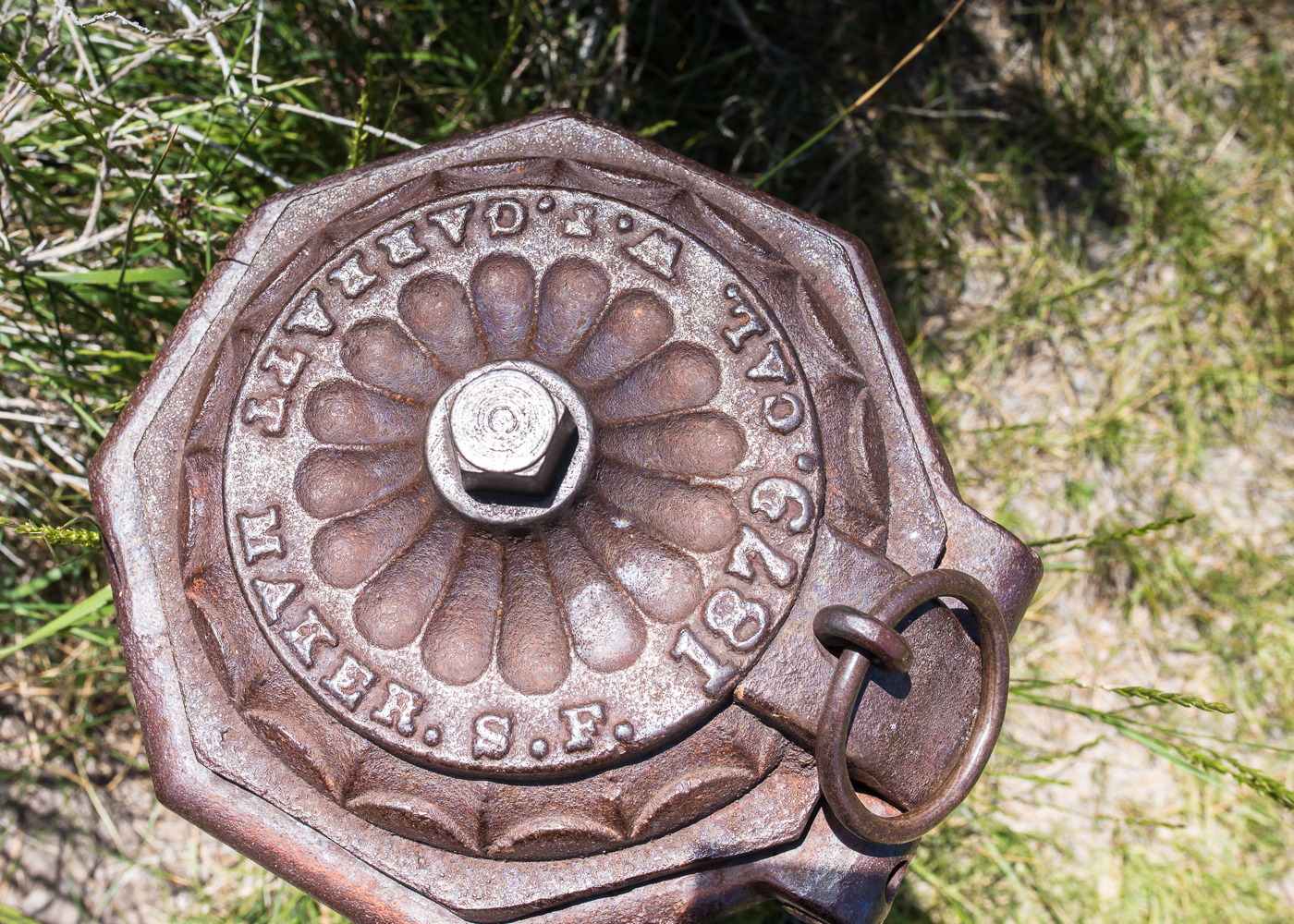 The tourists couldn’t hear Lottie, but I could.
“Within five years, nine mines had shipped $34 million dollars of ore by stage through Aurora to Carson City and San Francisco–where the gold was minted into coinage.”

“The stage ride was through a thick forest, all the way from Mono to Bridgeport to Reno. But, year by year, the forest disappeared. Acres of timberland was stripped of Lodgepole Pine to build homes, reinforce mine shafts and to burn for winter warmth. Bandits robbed the stage
so a railroad was built and its log tracks required the cutting of even more trees. When they finished it, the train brought more townspeople and they needed even more firewood.”

I looked down at the treeless rolling terrain that led down to Lake Mono and changed the subject.

“What happened to the gold?”

“Well, I’ll to tell you a secret, she replied as we stopped beside a mound of broken earth–just town side of the Standard Mine.

“When the Standard Mine dug for months without a strike, people panicked. Some of us, however, sifted the waste piles for gold dust and waste ore. Soon, the mine engineers saw what we were doing and piped in water from the lake to sluice gold particles from rock—like we had been doing for months.”

“What happened when it ran out?”

” A chemist was brought in to extract every grain of gold dust from the surrounding waste piles. He discovered that a combination of mercury and arsenic did the trick. The town stumbled on another few years—and the toxic chemicals were washed out of sight back into the earth.

I walked past the rusted chassie of a pre-WWII automobile lying beside the wooden remains of an authentic Conestoga wagon.

“People lived here for a long time after I died, but the town had long seen its day.”

“I saw the future coming” whispered Lottie.
“Remember I said, men loved to tell me their secrets? The top man at the mine said he invested his wealth in a San Francisco hotel and restaurants. People need to eat, and people need a place to sleep he told me. That’s more valuable than gold, he said. I wasn’t rich, but I was smart enough to hide the coins, gold shavings and jewelry I was given. I hid them in goods I sent to San Francisco—a little at a time —so as to not to draw anyone’s attention.”

She gave me a wicked smile. I could see how so many had been smitten with this beautiful yet practical ghost. I took a close look into the window of the once bustling Barber Shop.

“Lottie, One last question,” I implored.“How did it end?”

As I spoke, I saw more ghosts inside—the barber giving a shave and customers debating local politics.  They noticed me too, and  turned to give me the thousand yard stare.

“I showed you how the town was crowded with wooden homes, barns, saloons and carts. Three fire stations were built and we even had trained fire volunteers. But no one bothered to maintain the water pipes–we were too busy finding gold! See the buckets lined up and the fire bell across the street?”

I nodded my head then noticed a water pipe and its valve sticking out through the brittle sage and for some reason felt compelled to take a picture.

“A young boy, playing with matches, began a stable fire. The flames jumped easily from place to place. In the chaos, the fire fighters found a valve had frozen and there was no water to be had. Miraculously, they managed to save the firehouse.”

“The bell rang and rang,” said Lottie, “but there was no water for the hoses.”

I thanked Lottie for the tour she gave me, and asked her if she wanted me to walk her back to her grave.

“No, these days I prefer to walk alone,” she said with a smile.

Before her figure vanished in the way that all apparitions, mirages and dreams always do, she turned and gave me a friendly warning.

“Life is simple really. Gold is temporary. So are towns. People are the same the world over. All we really require are food to eat and shelter from storms. We can choose to live honestly and comfort others. Or we can choose to lie, steal and kill. But, when you kill your neighbor and you kill the earth around you, you speed your own demise. Not until your are a ghost yourself, do you see the truth so clearly: guns, opium, liquor, hate, vanity and yes, gold—are detours from happiness. Death comes sooner than you want. Your former neighbors may decide which side of the cemetery fence you are buried on, but they are not the judge that matters. You are.”

Lottie was gone. I walked the steep hill back to my car, and allowed my thoughts to return to the present moment.

Today , the town of Bodie is preserved by the State of California as Bodie State Historic Park.
If you decide to visit, you can drive into the park from May to October. In Winter the climate is too harsh for most, and the roads are impassable. The stagecoaches and railroad disappeared along with the gold. 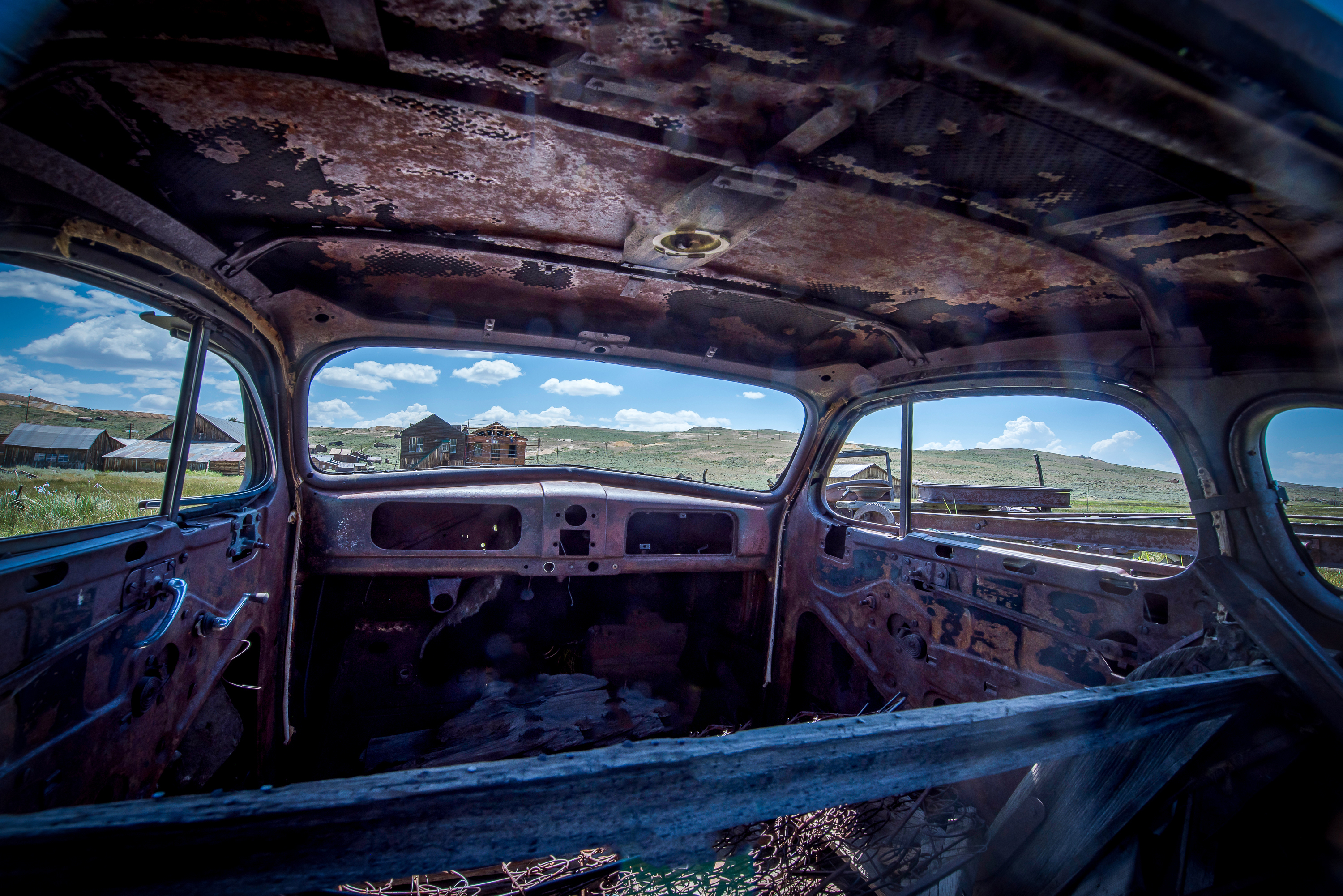