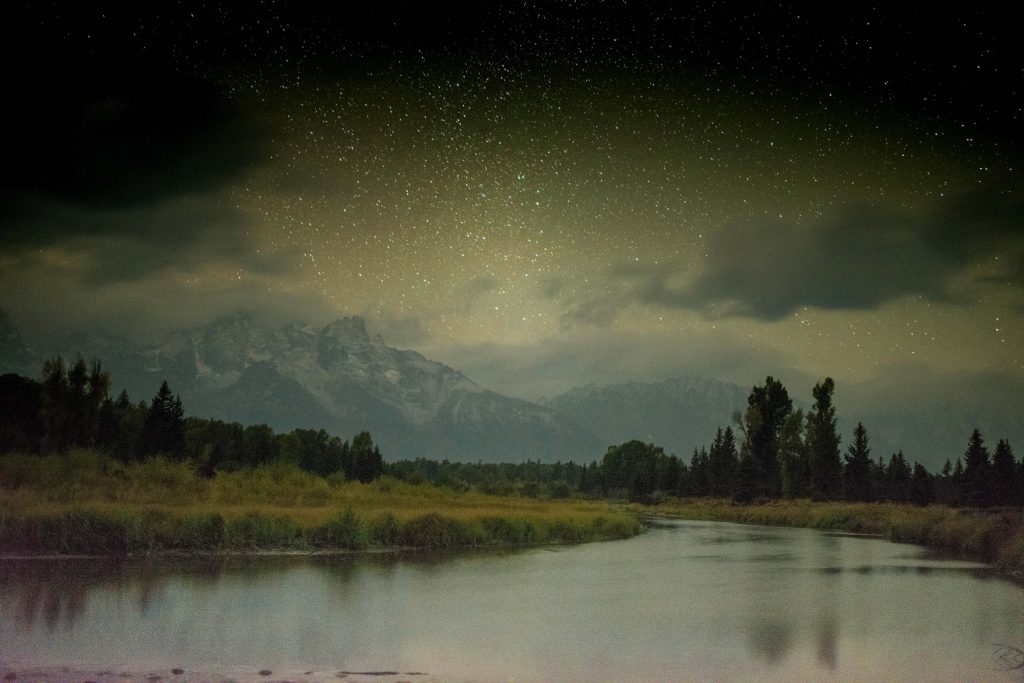 We were stuck in our cars at a rest stop in the very wet shadow of Grand Teton mountain. Rain poured down upon our parked caravan of night sky photographers. It was 11:30 pm and seminar leader, Mike Berenson of Night Sky Photography LLC was walking between vehicles giving seminar attendees a hopeful weather update. I rolled down the window, and he nervously asked how my wife and I were holding up.  I understood the pressure he was under to deliver a good experience.

“We’re good with any call you make, Mike”

“I am seeing a break in the clouds happening down in the valley back at Moulton Barns—possibly in an hour. We’re going to
move again”.

We pulled out of the String Lake parking area, the third chase this night to find a clear patch of sky. The car headlights offered a narrow channel of visibility— alternating vistas of  Lodgepole Pine forest and  sagebrush meadows. At the first switchback curve our car beams swept across a clearing and  before us glowed two dozen pairs of eyes.
Each set taller than a man’s.  A stag elk and his harem! The twelve pointer stepped forward without fear. His antlers appeared like wings outlined in a glowing halo of rain and snow. I took this as a good omen in an otherwise topsy- turvey September in which strong Hurricanes ripped the Caribbean and an early winter thrust itself upon Wyoming.

The Elk however, were sounding their bugles and rutting in season—precisely as they should. Perhaps, nature would normalize for a few hours and make it possible for us to  capture one of photography’s most elusive subjects.

Who can forget the first time they saw the starry sky far from city lights! I first witnessed a velvety black sky filled with stars–from an outer island of the Bahamas–it was located over hundreds of miles from the nearest city!
Here, on this small sandbar of Palm Trees and sailboats, the heavens revealed a roadway of shimmering stars that seemed glued together in a milky band that crossed overhead and touched each horizon.

This span of stars rose right out of the western Bahama Sound and fell into the dark Atlantic to the east. This object of incomprehensible and humbling size I later learned is inner bands and central core of the galaxy in which our small solar system resides.

The majestic Elk was a indeed a good omen.  Rain ceased to mire the windshield and a star bright star peaked out.  This  miracle patch of clear sky, opened further as we raced down from the Tetons  into the valley called Jackson Hole. We departed the weather-making mountain, and arrived at a row of barns built by Mormon’s in the 1880’s. We tumbled out of cars and grabbed our tripods and camera packs. “Aaaah!” “Oh its beautiful”. “Amazing!” Our eyes adjusted to the dark and the Milky Way was revealed! 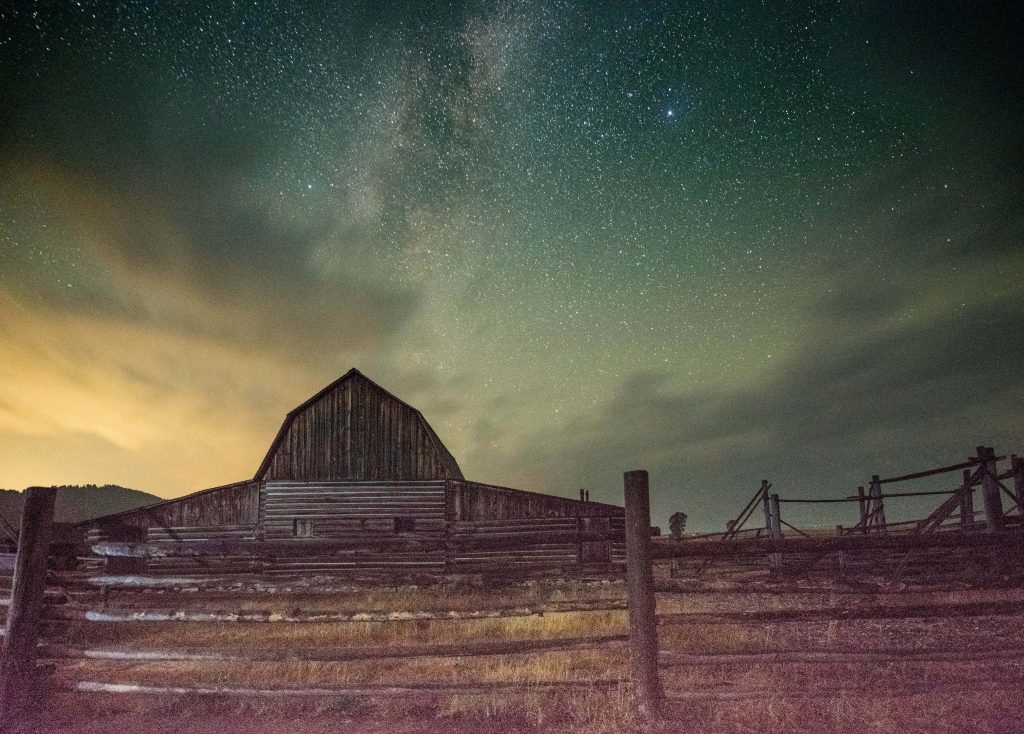